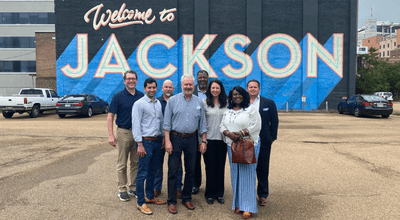 Another $8.6 million in expenditures on tap to address Jackson’s water billing needs

Jackson city officials are planning to spend another $8.6 million to correct problems with its water billing system.

Although a lot, they say that this expenditure will go a long way to help shore up billing complications that have been going on for years.

Chief Administrative Officer Robert Blaine said the plan would include extending its existing contract with Mythics Inc., to align billing software and hardware to ensure that the components work together.

Blaine says the city had the cash on hand to pay for the work, but had not determined whether it would bond the project out.

“One discussion we’re having is how much cash do we need to keep in the reserves, versus how much we need to finance,” he said, “in case we have an emergency in the future.”

Meanwhile, the city is planning a complete reorganization of its Water-Sewer Business Administration, to ensure that employees will be able to maintain and operate the new software once it is in place.

“We have to make sure that the structure aligns with the software we have in place and make sure the employees have the skills to maintain that software over time,” Blaine said. “We can’t have employees that are running a system that are not certified in running the system.”

Discussions come about two weeks after the city brough on another contractor to replace and service its commercial water meters, and more than a year and a half after it initially brought on Mythics to transfer its billing software onto a cloud network.

Previously, billing software was located on the city’s older terrestrial servers, which constantly went down. Blaine said moving the software onto the cloud did help stabilize the system.

“There are three separate components,” Blaine said. “We have the hardware, which is the meters in the ground and the collectors and the repeaters. The second is the software. The third piece is … human capacity. We have to have the right organizational structure to align with the software and the hardware.”

The reorganization will likely include re-writing job descriptions, adjusting employee compensation and requiring certification and ongoing education as a requirement to maintain employment.

WSBA currently has 46 staffers in the business office and another eight in the field.

Blaine said he hopes to bring a contract amendment to the council in time for its December 15 meeting and a WSBA reorganization plan to the council sometime in January.

“This is truly riding a bicycle while we’re fixing it,” he said. “We’re maintaining the one system we have no, building a new system and organizing how that is structured,” he said. “Once we’re gone through the process, we’ll have a brand new, shiny bicycle that runs fantastic.”

The city has ben working to address billing complications for years, ever since work wrapped up on the Siemens contract. Jackson brought on the international firm in 2012 or 2013 to completely overhaul its metering and billing system.

Work wrapped about five years ago and problems have ensued. Many customers do not receive regular statements, while others have received bills inaccurate bills.

In November, the Associated Press reported that several residents had filed suit against the city over “excessive water bills.”

Blaine said the city is focusing on fixing the commercial meters first, saying addressing that problem would give Jackson “the biggest bang for our buck.”

“Once we fix the billing system and we fix commercial … we can go in and do an assessment on the residential side,” he said.

On November 25, the council entered into a “master utility service agreement” with Sustainability Partners LLC. The Arizona-based firm will help WSBA procure, replace and maintain the commercial meters installed as part of the Siemens work.

In all, about 6,000 commercial customers will be impacted by that agreement.