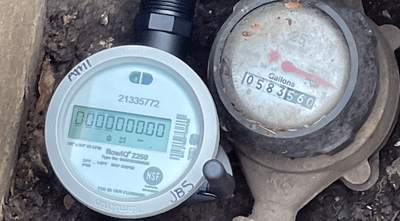 All of the roughly 35,000 outdated, 30-year-old water meters throughout Lake Charles will be replaced with new automated meters over the next 16-18 months, following unanimous City Council approval Wednesday.

Mayor Nic Hunter said these new meters will provide customers with more accurate water bills and remove the need for meter readers. The meters will also relay data via radio to quickly identify water leaks and reduce the amount of water wasted throughout the entire system, he said. Kevin Heise, city utilities manager, said it will be the “most advanced metering system” on the Gulf coast.

“We need to bring this city up to modern times,” Hunter said. This initiative really is a game changer for this city. I think, in five or 10 years, we will look back at this moment and realize how important this was for our water system.”

The city will enter into a cooperative endeavor agreement with Sustainability Partners, the company that will supply and install the new water meters. The effort will mostly be funded by $2 million the city received from the American Rescue Plan Act.

Council members also approved charging households and extra $2 to $3 service fee on their monthly water bills to help pay for the effort. Hunter said these charges won’t take effect until July 2023, once all the water meters are installed. Businesses may be charged more, based on the size of their water meters. he said.

City officials have discussed upgrading its water system over the past couple of years, Hunter said. However, Hurricane Laura’s August 2020 landfall and the winter storm last February exposed weaknesses in the system and pushed for quicker action. Had the city updated its water system before the winter storm, it may have lacked sufficient water pressure for one to two days, instead of roughly five days, he said.

After the winter storm, hundreds of city employees and contractors were scouring the streets, truing to pinpoint water leaks with the naked eye, Hunter said. Heise said many homes that had burst pipes were still unoccupied at the time because of damages caused by Hurricane Laura.

“With these new meters, one person at city Hall could have an immediate print out of every home in the city that had a water leak,” Hunter said. “Those hundreds of employees could have been reduced and, within hours, they could have targeted those individual homes, turned off the water and restored water pressure throughout the city.”

An inability for the city’s meter reading company to provide full staff led to “estimated billing,” which caused frustration among residents on their water bill amounts, Hunter said. The automated water meters will guarantee dependable water bills for customers, he said.

Heise said the new water meters have a 30-year battery life. Council members also approved extending a water/sewer utility service bill payment assistance program between the city and Catholic Charities through June, or until funds run out. The program benefits customers within the city who were impacted by Hurricane Laura and Delta, as well as the winter storm.

Later in the meeting, the council also approved a resolution, supporting Hunter’s appointment of Delton Carter as the new Lake Charles Fire Department chief. Carter is replacing Keith Murray, who retired in November. Hunter said the process of hiring a new fire chief was thorough. Cater, a 22-year veteran with the fire department, thanked the city and his family.