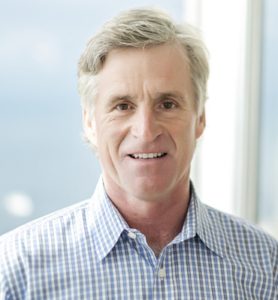 Pete Higgins is a founding partner of Second Avenue Partners, one of Seattle’s most experienced teams providing management, strategy, and capital to early stage companies.

Prior to founding Second Avenue Partners, Mr. Higgins spent 16 years at Microsoft Corporation. He was a member of the Office of the President, reporting to CEO Bill Gates. He was a group vice president of the Interactive Media Group at Microsoft from 1996 to 1998. As head of the Interactive Media Group he was responsible for Microsoft’s online, consumer software, and hardware businesses.

Mr. Higgins joined Microsoft in 1983. From 1995 to 1996 he was group vice president of Applications and Content where he was responsible for developing, marketing, and localizing Microsoft Office. From 1988 to 1992 he was general manager and then vice president of the Analysis Business Unit, leading the rise of Microsoft Excel to the leadership position in the personal computer spreadsheet market.

Mr. Higgins is the chairman of SEEQ Corporation and a director of WISErf Corp. He is the former Chairman market leader (OTC:LEDR), Insitu Corporation, Modumetal, and Director of ADIC Corp. Mr. Higgins serves on the board of trustees for The Brookings Institution and the advisory boards for the Woods Institute for the Environment, and Precourt Institute for Energy at Stanford University, and the Stanford Athletics Board.